The Agricultural Development Bank (ADB) has fulfilled its sponsorship obligation to the 2017 National Best Farmer, Mr. Philip Kwaku Agyemang with the presentation of a cheque for Four Hundred and Forty Thousand Five Hundred and Seventy Ghana Cedis (GH¢440,570.00).

At a brief ceremony in Accra, the bank handed over the cheque to Mr Philip Kwaku Agyemang through the Ministry of Food and Agriculture (MoFA).

The Managing Director of ADB, Dr John Kofi Mensah, said that since 2001, the Bank had committed itself to building a fully furnished three-bedroom house at a place of choice of the national best farmer.

“Since then, we have committed the cedi equivalent of US$100,000 each year to that noble cause. We have since then built a total of 15 houses for award winners in various locations, including the Greater Accra, Ashanti and Brong Ahafo regions, just to name a few,” he said.

He explained that the bank, in consultation with other stakeholders, especially MoFA, “decided to give a listening ear to the concerns of the farmers and, therefore, moved away from the traditional three-bedroom fully furnished house given to the national best farmer to providing the sponsorship package of the cedi equivalent of $100,000 for its productive use by the national best farmer”.

In a speech, the acting Chief Director of the ministry, Mr Patrick Ankobea, commended Mr Agyemang for emerging the overall best farmer in the country.

He described Mr Agyemang’s achievement as a “feat that we are all supposed to be proud of because our farmers contribute to the well-being and sustenance of the people of this country”.

He said the nation appreciated the contribution of farmers, which explained the institution of the National Farmers Day to honour them.

“As a nation, we are keeping our special covenant with our farmers by demonstrating how much we appreciate their efforts,” Mr Ankobea said.

In his response, Mr Agyemang pledged to use the money for the purpose for which the noble cause was initiated, adding that it would help him expand his farm and subsequently employ more people.

He said he would use the money to renovate his 20-unit poultry structure, purchase over 30,000 growers and feeding ingredients and diversify his farming.

He thanked the government, MoFA and  ADB Bank for the package and said he was hopeful that the award would entice the youth into agriculture. 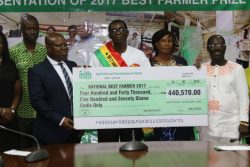