The Managing Director of Agricultural Development Bank (ADB), Dr. John Kofi Mensah, has said he believes with the bank’s commitment Ghana will become self-sufficient in poultry production by 2022.

Speaking at a poultry value chain stakeholders’ meeting, where a loan facility of GH¢23.2million was presented to six players in the poultry value chain, Dr. Mensah believes now is the time to embark on aggressive import substitution, protect the local currency and promote sustainable jobs in the agriculture sector.

“We believe that within two years we will no longer import chicken into this country, and our poultry farmers can feed us without help from outside. We have all the resources as a nation to be self-sufficient in poultry production, but we have not taken the bull by the horns to do so,” he said at the meeting in Accra yesterday.

The beneficiary entities are made up of one hatchery, one feed miller, three producers and one processor, making it a circular value chain that relies on one another to ensure successful productivity.

The initiative, which aims to invest GH¢500 million in soft loans, with an interest rate of 10 per cent annually, in businesses in the poultry value chain to help de-risk their operations, increase production and reduce imports.

It is in partnership with the Ministry of Food and Agriculture (MoFA), the Bank of Ghana (BoG), the Ghana Incentive-based Risk Sharing System for Agricultural Lending (GIRSAL) and the Outgrower and Value Chain Fund (OVCF) and meant to end the country’s dependence on imported poultry products and create jobs for the youth.

The Managing Director (MD) of the ADB, Dr John Kofi Mensah, said the initiative was the bank’s support for the government’s Broiler Revitalisation Programme aimed at increasing the domestic production of chicken.

Describing the project as the first of its kind in the country, he said it was the bank’s contribution to help move the government’s Rearing for Food and Jobs programme.
He announced that the project would ensure that 108,000 birds were produced per
week to serve the local market.

He expressed the conviction that when the project was religiously implemented, it would ensure that in the next two years Ghana would not import poultry. 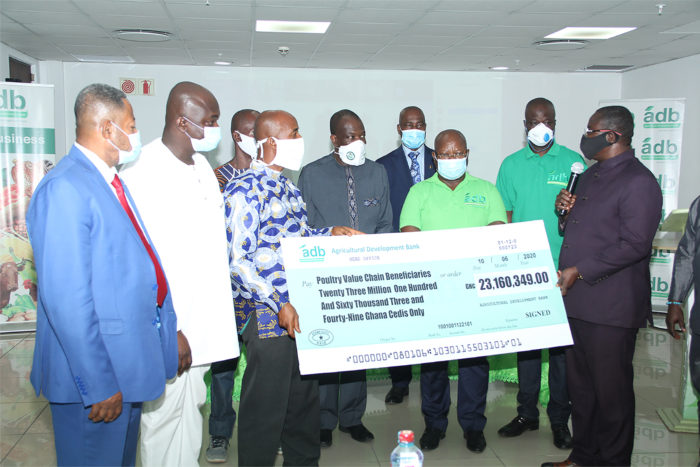 Dr Mensah, who was supported by the Deputy Managing Director of the bank, Mr Alhassan Yakubu Tali, to make the presentation, explained that unlike other projects in which there might be various financiers at each level, with their own terms and timing, “in this one the ADB is managing everybody on the value chain because we want to ensure that the output of one fits into the input of another”.

He said that was aimed at eliminating the situation where, for instance, the hatcheries would produce the chicks but there would be inadequate feed or no producers or processors.

“In this case, we will determine the quantities that have to be produced at every level of the value chain because we are doing the funding and we will give you the necessary support,” he explained.

While outlining the roles of the partners, he explained that while the MoFA was to provide technical support for the beneficiary businesses under the initiative, the GIRSAL and the OVCF were absorbing the risks associated with lending to businesses in the poultry space.

Dr Mensah described the programme as “a big revival of the poultry industry” that would help spur growth in related sectors, including maize and millet production, provide low-cost but quality chicken for hotels and other hospitality sector operators and create thousands of jobs.

He said the initiative would mainly target existing businesses with experience that engaged in the production of poultry feed, the rearing of birds, the processing of meat and the marketing of chicken to ensure that the entire value chain was properly funded to help remove the bottlenecks.

In a remark, the Technical Advisor of MoFA Mr Emmanuel Asante Krobea, described the initiative by the ADB as innovative, saying it would ensure that one of the flagship programmes of the ministry, Rearing for Food and Jobs, was successful.

He acknowledged the role played by the bank since the inception of the Planting for Food and Jobs programme, particularly in fertiliser subsidies, which ensured that the government retrieved funds invested in the programme.

Mr Asante Krobea urged the poultry industry to leverage the programme put in place by the bank and also pay back the loans, stating that repayment was a critical aspect of agricultural financing.

For his part, the Senior Agribusiness Specialist at the GIRSAL, Mr Takyi Sraho, explained that the aim of GIRSAL was to help de-risk lending to agriculture by financial institutions.

The Monitoring and Evaluation Specialist at OVCF, Mr Michael Kpormegbe, said the fund was a medium to long-term facility meant to help smallholder farmers linked to the market. 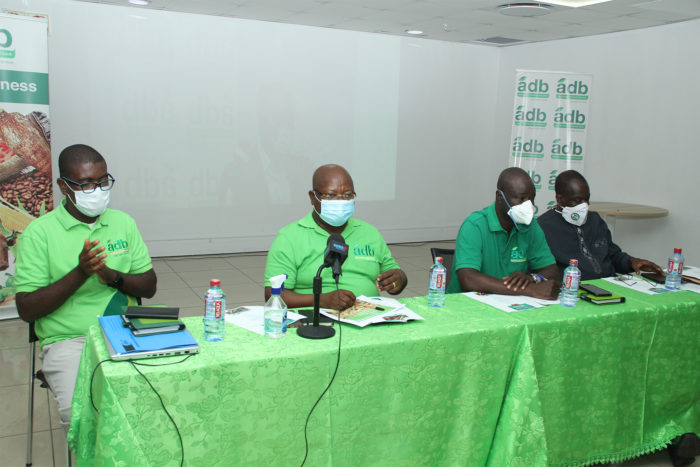