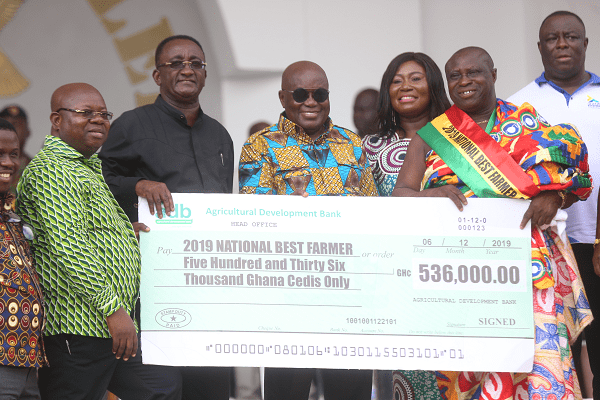 Mr. Charles Gyamfi from the Tano North Municipality in the Ahafo Region was on Friday crowned the 2019 National Best Farmer.

The 58-year-old farmer, who ended his education at the secondary level and took to farming 25 years ago and won the prestigious annual award at a colourful durbar held at the Volta Regional capital, Ho and took home a cheque for GH¢536,000 donated by the Agricultural Development Bank (ADB).

President Nana Addo Dankwa Akufo-Addo was joined by the Minister of Food and Agriculture, Dr Owusu Afriyie Akoto, the Managing Director of ADB, Dr. John Kofi Mensah, to decorate the award winner with a sash.

He diversified his farming activities by combining the cultivation of food and cash crops, animal husbandry and aquaculture and also adopted integrated cultural practices to boost his productivity.

It was a moment of pride for the father of five, when he was pronounced winner of the highest national farmers’ prize.

A citation eulogising the accomplished farmer, read by the Minister of State in charge of Agriculture, Dr Gyiele Nurah, was received with a spontaneous standing ovation, as the gathering clapped incessantly to cheer him on as he walked calmly to receive his honour.

The citation further praised Mr Gyamfi for practising good record keeping; using modern technology; having good knowledge of husbandry practices and being environmentally sustainable in his operations. He uses droppings from the animals as manure and uses the maize and other cereals to feed fish.

It added that the great impact his farming activities had on society, including employing 158 workers, and his social responsibility initiatives in the education, health and other sectors, made him fit for the crown.

It was all joy when the holder of the 2018 crown, Mr James Oppong Boateng, also from the former Brong Ahafo Region, stepped forward to shake hands with Mr Gyamfi.

Present at the ceremony organised on the theme, “Enhancing small-scale agriculture towards agribusinesses development,” were ministers of state, regional ministers, financial institutions, traditional leaders, farmer associations and stakeholders in the agriculture value chain.

The First and Second Runners-up were Nana Yaw Sarpong Siribuo from Juaben in the Ashanti Region and Mr Abdulai Antiku Seidu from the Upper West Region.

They received a tractor and a double-cabin pickup vehicle respectively.